THE arrival of two 9400 TEU container ships, the MSC Elma and Maersk Skarstind, back in July heralded the arrival of a new class of container vessel to visit Australia. Both vessels are of the so-called ‘Bosporus’ class, so named as their overall length, 300 metres, is the maximum size for a vessel to transit the Bosporus Strait without special permission. The Bosporus Strait connects the Black Sea with the Aegean Sea and divides the City of Istanbul into two halves. The Bosporus class vessel’s beam (width) is 48 metres that translates into 19 containers wide on deck.

Both vessels have called at most major Australian ports but with varied levels of success. The draft, the width and height of the container stack on deck as well as the air draft (height from the waterline to the top of the mast) of these vessels have all been issues that have limited the efficient working of the vessel. Due to their size the berthing and unberthing of the vessels in some ports was restricted to daylight hours only as well as light wind conditions.

Stevedoring challenges
Patrick Port Botany and VICT at Webb Dock are currently the only operators in Australia that have quay cranes large enough to reach 19-containers-wide, consequently the stowage of containers on deck had to be adjusted for other ports as the outer cell could not be reached.

Both Patrick and DPWA have on order quay cranes that are able to reach in excess of 19-containers-wide. The first of these cranes are expected to arrive in early 2020. The stacking height of containers on deck had to be limited to seven-high in all ports as a number of cranes did not have the clearance to go any higher.

The limitations on these ships were due to restrictions on the draft to which the vessel could be loaded at some of the ports. For example, the Westgate Bridge in Melbourne caused a problem for the MSC Elma. To have sufficient clearance to pass under the bridge careful calculations and additional measures had to be taken. The Maersk Skarstind however, had a collapsible mast which made the pass easier.

From comments made by the shipping lines involved and looking at their forward schedules it seems that these vessels were once–off only and were used to test the ability of Australian ports and stevedores to handle vessels of this size. No doubt Maersk, MSC, port authorities, harbour masters and stevedores will be analysing the results of the vessels’ calls and see if using this type of vessels on a regular basis will be an option. Further simulations will also be done to investigate whether vessels of up to 346 metres in length are able to enter certain ports. Shipping lines will no doubt want to keep bringing larger vessels to Australian ports due to the reduction in cost per TEU. However, it’s unlikely that this reduction will be passed on to the importers and exporters.

Global perspective
Globally it’s a different story. The largest containership presently afloat is the 23,000 TEU MSC Gulsun, which entered service back in July. The vessel is the first one of a batch of six ordered by MSC in 2017. While the new building order market for 18,000+ TEU is currently healthy, the major workhorses in the global container fleets are in the 5000 TEU to 15,000 TEU-range or smaller feeder vessels in the sub-3000 TEU-range.

Maersk CEO Soren Skou, as well as other shipowners, thinks 20,000+ TEU is about the upper limit of container vessel size as there are only a small number of ports which can handle these behemoths efficiently. One of the issues is that while the width (the MSC Gulsun can carry 24 containers wide on deck) and depth of these vessels is getting bigger, the overall length is approximately 400 metres, which limits the number of quay cranes that can fit over the vessel whilst working alongside. This in turn affects the berth rate and how quickly these vessels can be turned around whilst in port. To fill these vessels also requires more port calls meaning an increase in inventories costs. And let’s not forget the logistical problems if one of these ships is involved in an incident such as the grounding of the 19,000 TEU CSCL Indian Ocean in the River Elbe in 2016, or if there is a fire on board.

Considering our market conditions and port infrastructure I doubt if we will see one of these vessels in Australia anytime soon as our container market is just too small to fill them, even 50 years from now. 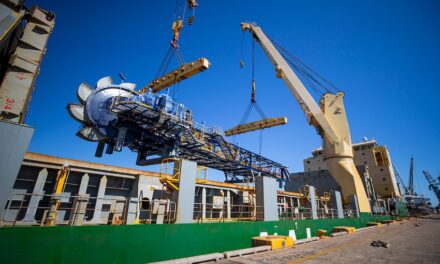