INCREASING container throughput at Port of Darwin is a focus for leaseholders Landbridge Corporation.

Landbridge vice president Mike Hughes spoke with Daily Cargo News at the recent ALC Forum 2019 in Melbourne during which he took part in a panel session about developing northern Australia.

“Overall very positive,” Mr Hughes said, when asked about the Landbridge view of the Darwin lease acquisition more than three years ago.

“It is fair to say we leased the port in what was a downturn in the cycle, commodity prices were down, the Ichthys project was coming to the end of construction.

“But the upward trajectory in business has happened pretty much exactly as we had expected so Ichthys is now on production. When Ichthys is on full production, we’ll be over 12m tonnes per annum of LNG, a very significant LNG exporting port.”

Exports of other minerals are also reported to be performing well, adding to Mr Hughes’s sense of confidence.

“So the port is performing very well, or as expected and certainly our ongoing relationship with the Northern Territory government or governments has been very positive,” he said.

One of the challenges for the port has been the small scale of containerised traffic through Darwin.

“So maintaining a cost-effective supply chain for containers through Darwin is a challenge and we clearly need to build scale to make that cost effective,” he said.

As is well documented, Landbridge is a Chinese-owned company and this has led some commentators to question (then and now) if they were appropriate to operate an Australian port.

Asked about this topic, Mr Hughes said there had been little concern in the Territory.

“We’ve had a change of government since we leased the port and both sides [of politics] are very positive about working with Landbridge,” he said.

“Secondly, although there was some criticism in the press prior to the transaction happening, obviously we worked very closely with Canberra with Defence and others.

“Their view was what they need is a growing Darwin to provide both the facilities that they need to run that as a defence port.

“Their commentary was very much that they expected, and effectively wanted, a foreign investor, somebody who would take a long term perspective and invest in the port.” 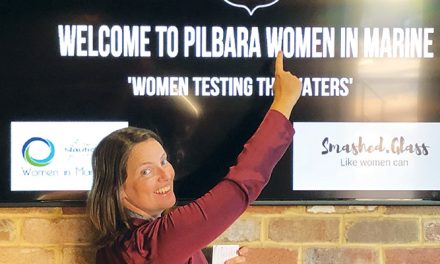