EARLIER this month, the Council of Australian Governments meeting supported the National Freight & Supply Chain Strategy which includes clear commitments to connecting regions and communities to “major gateways”. One of the ways in which this could occur is through coastal shipping.

Ports Australia CEO Mike Gallacher said that COAG support commits the federal government to the pursuit of reforming coastal shipping whilst at the same time “sending a message that the proposal has widespread support across all jurisdictions and is therefore in the national interest”.

In the strategy’s National Action Plan it outlines a plan to 2024, which includes “regulatory reform to improve the viability of coastal shipping”.

“The current federal government has previously shown interest in reforming coastal shipping but this is the first occasion the issue has been included in a raft of proposed national freight strategy initiatives to be introduced over the next few years,” Mr Gallacher said.

“COAG support for coastal shipping will now give cause to all states and the Northern Territory the opportunity to examine whether such a proposal could work in their jurisdiction.”

Jurisdictions will report back to the COAG Transport and Infrastructure Council in November with their implementation arrangements for delivering the strategy.

“The Queensland parliament has recently concluded an inquiry which is now being considered within government. The Victorian government is currently conducting an inquiry seeking a better understanding of coastal shipping, whilst the New South Wales’ government freight strategy has also flagged an examination of the proposal,” Mr Gallacher said.

He said many communities in Australia are feeling the strain of congested road and rail infrastructure in cities and throughout regional communities.

“Coastal shipping has the potential to take pressure of those struggling transport networks,” he said.

“The recent Infrastructure Australia report on congestion illustrates that action needs to be taken, otherwise the cost to the economy could be as high as $40bn by 2031.

“Ports Australia is looking forward to engaging with the federal and state governments in developing solutions that facilitate the implementation of the National Action Plan,” Mr Gallacher said.

There are around a dozen remaining Australian ships plying their trade on our coastline, down from about a 100 in the 1990s.

“That means a significant reduction in Australian maritime jobs which is not something as an island nation we can afford. It is imperative that both sides of politics focus their attention on this matter.

“I recognise that both sides of politics have publicly indicated their desire for reform, however it is in the detail where things have come to a grinding halt. Reform on coastal shipping is not easy but the time has passed to do nothing,” Mr Gallacher said. 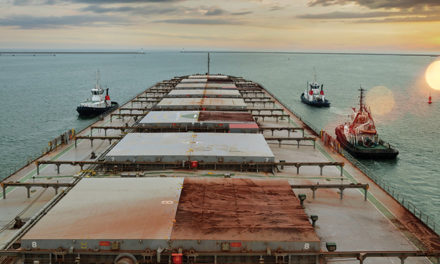