CONTAINERSHIPS announced its first successful LNG bunkering operation, with Containerships Nord took on about 240 tonnes of marine LNG at the Port of Rotterdam on 24 January.

The bunkering was carried out in a ship-to-ship operation from Shell’s bunker vessel the Cardissa. A statement from Containerships said future bunkering operations would be carried out at a normal operational berth simultaneously with loading and discharging operations.

The newbuild Containerships Nord began sailing from China towards Europe in mid-December, with three sister vessels due for delivery later 2019.

The vessels can sail for 14 days with LNG and they are to be bunkered once per roundtrip during their regular service loop between Containerships’ core ports in the North Sea and the Baltic Sea.

As the clock ticks down to 1 January 2020 when the IMO’s sulphur cap comes into effect, shipowners and managers are turning to alternative fuels to meet the new requirements. LNG is turning out to be a popular low-sulphur fuel, with several orders for large LNG-fuelled ships on the books. 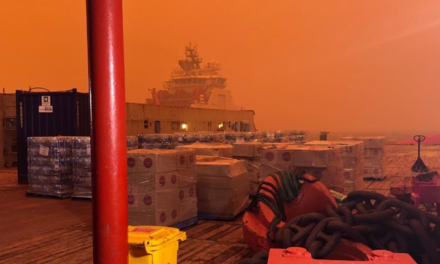