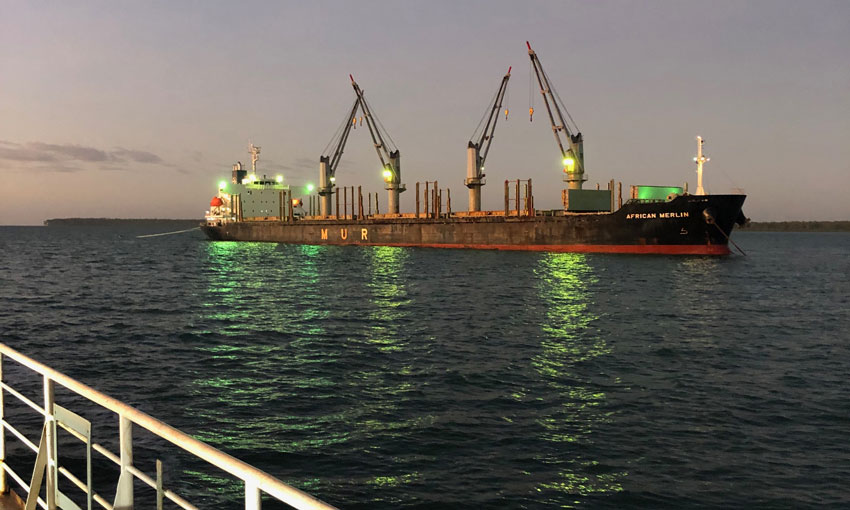 TWO recent shipments of mineral sands from Weipa to China may mark the start of the significant new trade for Far North Queensland, proponents believe.

North Queensland Bulk Ports Corporation is supporting Clear Logistics Australia in exporting up to 70,000 tonnes of mineral sands to China.

Two shipments already have made their way to China since Clear Logistics Australia sought to take advantage of “the rare opportunity” discovered at Urquhart Point, on the South Bank of the Embley River, 5km from Weipa.

The mineral sand was shipped on the vessel African Merlin (IMO 9701267), a bulker flagged in the Bahamas and launched in 2016.

Clear Logistics is a part-owner of Green Coast Resources, better known for the bauxite trade at Weipa’s Hey Point.

Clear Logistics marine superintendent Krysten Roberts said the mineral sands deposit at Urquhart Point was “a great opportunity to pivot our business into a new trade”.

Mr Roberts said the heavy mineral sands deposits were made up of elements for use in various commodities.

“These include Ilmenite, rutile and zircon, materials which are used in the production of paint, ceramics, sunscreen and cosmetics to name a few,” Mr Roberts said.

“To help us mine these materials, we had 15 people on the job at the peak of our operations, a mixture of locals from the Cape and Cairns. Where we can support North Queenslanders, we do.”

NQBP chief executive Nicolas Fertin said the fostering of trade at all their ports contributed to a strong growth in the regional Queensland economy.

“Weipa developed its economy on bauxite since the 1960s,” Mr Fertin said.

“Exporting mineral sand – even in small quantities – is a testament of Weipa business and NQBP’s effort and dedication to introduce new trade.”

Mr Roberts said Clear Logistics had plans for its mineral sands operation, with scope for an on-site plant.

“The mineral sands deposit is a limited resource, but we are hoping to build a plant onsite to high-grade the remaining material,” he said.

“In the meantime, we are remobilising back to Hey Point to reinvigorate our bauxite mining.”