Australia celebrates Day of the Seafarer 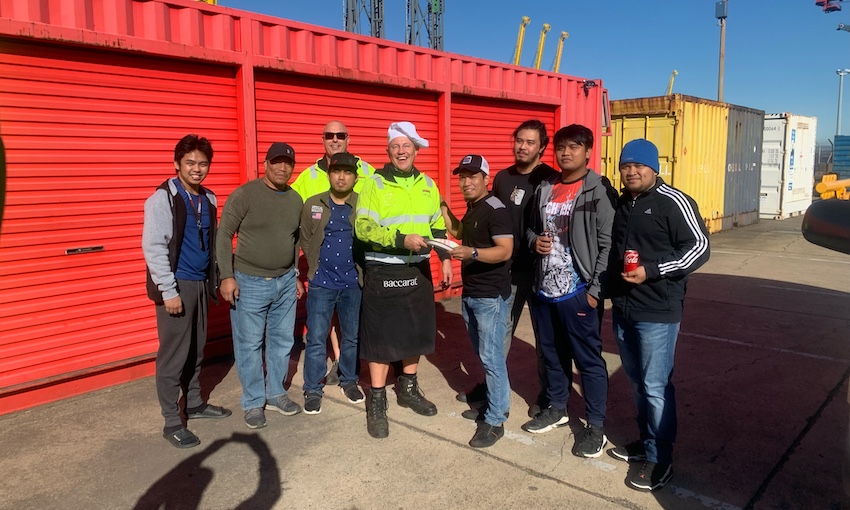 THE MARITIME industry, its stakeholders and supporters celebrated Day of the Seafarer 2022 in Australian ports and around the world on Saturday 25 June.

Day of the Seafarer was launched in 2011 as a dedicated opportunity to recognise the contribution and sacrifice of the global seafaring workforce.

This year’s celebrations were underpinned by the theme of maritime voyages and journeys, encouraging seafarers to share in their unique experiences and challenges.

“MUA dockers around the country cooked an Australian barbeque for these hard-working seafarers who at the height of the pandemic saw some 400,000 seafarers stuck at sea away from family and friends,” Mr Crumlin said.

“[These seafarers often had] limited or no communication, unable to get home to their loved ones and unable to enjoy shore leave in ports all around the world, and in some cases spending more than 14 to 15 months onboard.”

At Port Botany in Sydney, Patrick Terminals stevedores invited the crews from the vessels in the port to enjoy a breakfast barbeque, which Mr Crumlin said was warmly received by the seafarers.

“In Melbourne, both VICT and Patrick Terminals dockers also joined in the celebrations to say thanks for the valuable contributions seafarers have made to keep the world moving through the pandemic,” he said.

Mr Crumlin said that, despite the success of the events, it also highlighted the ongoing challenges around shore leave.

“Some captains, shipping companies and charterers are still yet to comprehend that access to shore leave is a fundamental right under the Maritime Labour Convention 2006, of which Australia is a signatory,” Mr Crumlin said.

“With a captain stating his company did not allow shore leave, another crew unable to attend due to 22 crew being unvaccinated, and with one terminal – if you can believe it – being so confused or belligerent, or both, this goodwill gesture by the dockers [could not fully] go ahead,” Mr Crumlin said.

“They were only going to allow off-duty workers to come in on their time off and take the barbeque on board for the crew.”

Mr Crumlin noted the ITF has been pushing for seafarers to have access to shore leave, especially as Australian authorities have lifted or eased restrictions and public health orders.

“The ITF along with others have been calling for the need for seafarers to access shore leave as a right under MLC 2006 for their welfare, mental health and to reduce fatigue on board,” he said.

“We welcome AMSA’s recent announcement they will be enforcing the MLC if it has found captains, shipping companies or charterers are denying any crew this basic fundamental right and the ITF will be reporting any breaches we may come across.”

The call for governments and employers throughout the global supply chain to improve seafarers’ welfare and working conditions was echoed by Paddy Crumlin, MUA national secretary and ITF president.

He said the economic and social importance of seafarers’ work has never been more significant, but their plight is still often unnoticed.

“With 98% of Australian imports and exports being transported by ship, the economic wealth we enjoy is directly attributable to the work of seafarers and other transport workers in the international shipping sector,” Mr Crumlin said.

“We should therefore, as a society, take a far greater interest in the struggles and circumstances of a workforce that is often subjected to mistreatment or just plain disinterest from employers and governments the world over.”

The MUA noted seafarers continue to struggle with lengthy crew-change delays and “bureaucratic hurdles” which force them to remain at sea longer than expected.

According to the union, they are often prevented from taking shore leave due to COVID-related restrictions and are also among the lowest vaccinated workforces worldwide.

The MUA said these situations make connectivity more important than ever but suggested most international ship owners do not provide basic WiFi and phone services to crews.

“Without seafarers, ships stop – and with that so does everything else,” Mr Crumlin said.

“The Day of the Seafarer is an opportunity for the industry to seriously engage with the issues these workers are reporting and address them in line with the values they claim to espouse.

“The importance of this work and the contribution made by these people can’t be overstated, yet they are some of the most vulnerable and mistreated workers throughout the global economy.”