You recently became CEO of Gippsland Ports – what does your role entail?
Gippsland Ports is responsible for the management and development of five local ports and two waterways along about 500km of coastline between Inverloch and Mallacoota. This equates to almost half of the managed local port area in the state and includes more than $170m of assets. The organisation maintains ocean access at Lakes Entrance through a 200,000-cubic-metre-per-year dredging program that ensures Victoria’s largest commercial fishing fleet and boating tourism sector are well catered for. Gippsland Ports has its own dredges, including a new, $20m, 1000-tonne ship. I am responsible for working with the board to develop and deliver the organisation’s strategic plan and to achieve its vision of being the most effective port and waterway manager in Victoria.

What are some career highlights?
I am a newcomer to the port environment, having spent the majority of my career as a civil engineer in the land development and local government sectors in Australia and overseas. I have been fortunate to have led a number of major projects in eastern Victoria. My most satisfying project was finalising the planning and approvals process and then delivering the $6.5m Mallacoota Ocean Access Boat Ramp. The project took almost 30 years to eventuate and to get it through the government approvals process and see the benefits it is now providing to boat users is fantastic.

How is the Gippsland lifestyle special?
Gippsland has to be the best kept secret in Australia. Living in Bairnsdale, you can drive two hours to Mt Hotham in spring and enjoy some of Australia’s best snow skiing, then drive back and put the boat in the water for an afternoon of water skiing on the Gippsland Lakes.

Did you grow up in Gippsland?
I was born in Bairnsdale and even two years in England and eight years in Hervey Bay (yep, the sunshine just got monotonous) didn’t change my mind on where I was happiest. I was lucky to grow up on a farm and spent much of my youth out and about fishing and shooting. The Victorian high country remains my happy place, having enjoyed numerous school camps hiking, skiing and camping in that amazing natural environment.

What did you want to be when you were growing up?
Like every true patriotic, well-groomed, well-educated Victorian, I dreamed of playing football for Collingwood. Unfortunately, a severe lack of sporting ability meant the best I could have hoped for was to play for the Sydney Swans, and that would have meant being ridiculed by family and friends.

Could you ever live in a big city?
I have often thought six months in Paris wouldn’t be a bad way to spend a bit of time. French food can’t be beaten and they really seem to have a great attitude when it comes to living life to its best. Equally, Melbourne has so much to offer when it comes to food and culture, about 10 degrees warmer and it would be perfect.

How often do you get to Melbourne?
Gippsland Ports is an instrument of the Victorian state government and my role takes me to Melbourne at least a couple of times a month. It’s a nice opportunity to get down and enjoy the city and know that I can be back to the peace of the countryside within about three hours.

What do you do in your spare time?
At 53 years of age I regularly don the Lycra and hit the road with a few mates. We pride ourselves as being marginally better than average and feel that few wear Lycra as well as our group. When I really do want to relax, I walk out into the paddock and talk to the cows – the best way to de-stress, and they don’t talk back.

Which Australian do you admire most?
I don’t think I can go past Anh Do as someone who shows what Australia is really all about. A guy who came across to Australia as a refugee from his native country of Vietnam, made a life for his family through sheer hard work and determination and has endeared himself to the nation. Anh’s modest, yet totally engaging and likeable personality makes him someone I would love to have over for a family BBQ.

Can you play a musical instrument?
I learnt the trumpet at secondary school and actually wasn’t too bad at it. Fortunately good enough to do a solo at school speech night but unfortunately not good enough to make any money out of it. Favourite music, hard to go past Phil Collins (yes I am that old) or Nickelback.

Where would you like to retire to?
I think East Gippsland will always be my home, amongst family and lifetime friends. But, Paris is still on the bucket list.

This article appeared in the November 2018 edition of DCN Magazine 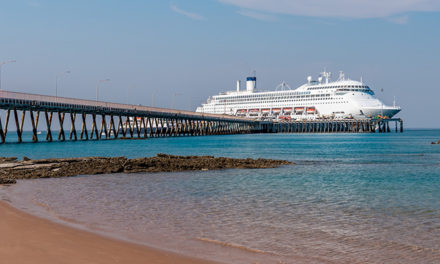