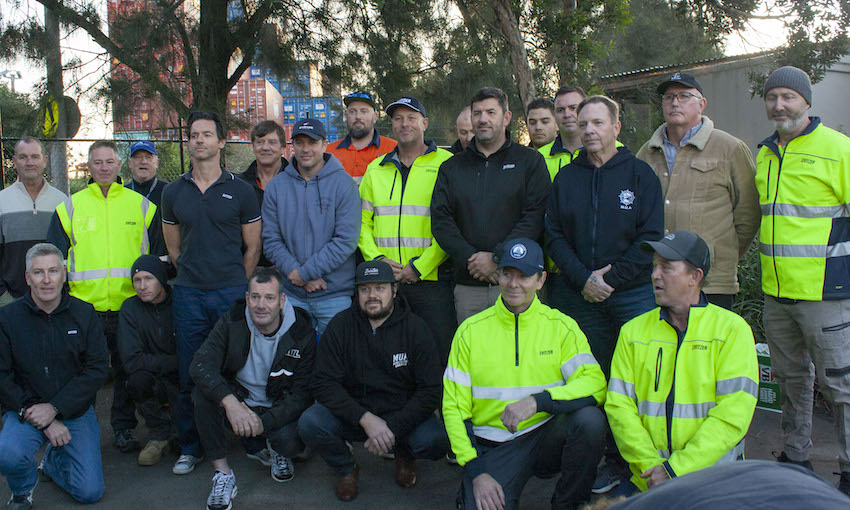 A BARBECUE at Port Botany was an opportunity for the crew of Portland Bay to meet the tug crews who kept the bulk carrier from grounding last week, but the 21 seafarers were denied shore leave and were unable to attend the event.

Portland Bay came dangerously close to grounding on the rocks of Royal National Park south of Botany Bay after it lost power on Sunday 3 July.

On Monday, tugboats SL Diamantina, SL Martinique and Bullara helped keep the ship from grounding as it inched towards the coast. Emergency tow vessel Glenrock arrived from Newcastle the next day.

On Friday evening, with Portland Bay berthed safely in Port Botany, Stella Maris chaplain Sister Mary Leahy hosted a barbeque at the port alongside the Maritime Union of Australia and the International Transport Workers’ Federation.

The intent of the occasion was to celebrate the efforts of everyone involved and enable the crews to meet each other. The ITF and MUA were joined by tug crews and representatives from Port Authority of New South Wales.

However, the crewmembers onboard Portland Bay were not permitted to come ashore, despite a recent notice from the Australian Maritime Safety Authority enforcing seafarers’ rights to shore leave.

Paul Garrett, MUA Sydney branch deputy secretary, told DCN it was “a disgrace” that the crew of Portland Bay were unable to the tug workers who prevented the situation from turning into a disaster.

“This afternoon … for reasons that no one understands, the crew have been denied shore leave and the opportunity to get off the ship and see [the tug crews].

“All those workers wanted to do was get off, see the tugboat workers, say thanks, shake hands, probably give each other a hug and just appreciate what maritime workers do to look after each other in their time of need.

“Who in their right mind would deny seafarers the right to come and say thanks in a circumstance like that?”

But despite the crew’s absence, the tug crews’ efforts were recognised, and the seafarers’ gratitude was passed on by Sister Mary.

“Yesterday I went down to the ship, and the lads were running on adrenaline … [they were] so excited to be alive and so grateful to the people who rescued them,” Sister Mary told the tug crews.

She said the seafarers were concerned for each other, especially as some had been “thrown around the ship”.

“We saw a few people limping yesterday, but overall, they were just ecstatic … to be alive, and grateful to you guys.

MUA Sydney branch secretary Paul Keating said salvaging Portland Bay meant prevented an incident similar to that of the Pasha Bulker, which ran aground in Newcastle in 2008.

“This is the reason why we need to make sure we fight for … highly qualified workers, as maritime workers in our industry, with the rights that they should all be given in relation to decent wages and conditions,” Mr Keating said to the crews.

“I want to thank each and every one of you comrades because you put your own lives at risk for the interest in saving other maritime workers and seafarers.

“We’ve had many calls from our members: wharfies, seafarers and port workers, to pass on their thanks and congratulations.

“We know how important your work is … when it comes to something like this, you are working class heroes.”

Negotiations to bring the seafarers ashore continued throughout the evening, but to no avail. However, tug workers and union representatives enjoyed dinner and conversations as night fell.

Matt Thompson, a deckhand onboard Engage tug SL Martinique while it assisted Portland Bay, told DCN the about the value of a good crew who can keep calm under pressure in dangerous situations.

“[When you’re out in weather like that] and you’re thinking of that ship and the crew on there, you don’t really think about yourself,” he said.

“Some guys might get in a situation where they start worrying, but it probably comes back to having a good crew.

“There’s no panicking on board, so you don’t panic, and you’re just thinking about what the job is and what you’re doing.”

It is understood the Portland Bay crew was eventually granted shore leave to attend a local church service on Sunday morning.