WHEN scuff marks started showing up on Port of Townsville water monitoring equipment in Cleveland Bay, scientists suspected a beast from the depths was up to mischief.

But just what manner of creature was this visitor?

Late last year the port’s scientists attached a Go-Pro camera to the marine water equipment, hoping to catch the creatures ‘in the act’.

Just 40 minutes after installation, the truth was revealed, with two green turtles shown to be using the monitors as a scratching post.

All were compromised by the green turtles’ impromptu investigation.

Mr Gebers was light-hearted about the turtles’ meddlesome behaviour.

“The turtles have actually helped us, as they have given the water quality monitoring system a good road-test,” he said.

With the mystery solved, Port of Townsville is taking precautions for more unexpected marine animal visits upon their high tech monitoring equipment.

“Based on what we’ve seen, we’ll be modifying the equipment to make it even more robust, also ensuring it is safe for turtles to interact with,” Mr Gebers said.

Aside from green turtles, Cleveland Bay is home to a wide range of marine life. The footage has led to plans for the port to install underwater cameras on many pieces of monitoring equipment in Cleveland Bay. 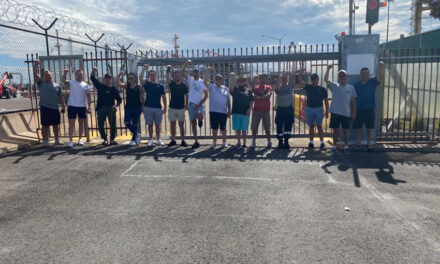