AUTHORITIES say they have made three arrests and seized hundreds of kilograms of border controlled drugs following the interception of a drug-filled fishing trawler near Newcastle.

The ABF’s Maritime Border Command found the foreign vessel and tracked its movements as it headed into Australian waters.

The Coralynne’s three crew members were arrested and “a large amount” of drugs, allegedly cocaine, were identified in its cargo.

The Coralynne was towed to NSWPF Marine Area Command in Balmain.

Investigators are to allege the illicit drugs were stored in the engine room.

The men appeared before the Sydney Central Local Court earlier this week and were denied bail.

They will next appear before the same court on 14 October.

Investigators from the AFP, NSWPF and ABF later raided premises in the Sydney suburbs of Chatswood, Zetland and Glenbrook.

“Our ability to work together using the resources and expertise of each of our agencies has again prevented the importation of illicit drugs into our community,” Assistant Commissioner Gough said.

“The efforts of officers, including those from the Marine Area Command, to tackle 3.5 metre swells to ensure this illicit cargo didn’t reach our shores and those we alleged are responsible were put before the courts should be commended,” Assistant Commissioner Smith said.

Australian Border Force Regional Commander for NSW Danielle Yannopoulos said even during a pandemic, the ABF’s priority was to protect Australia’s borders and prevent illicit drugs being smuggled.

“Australia’s maritime border is vast and criminals think they can exploit that and evade detection, but they are wrong. Criminals should always assume the ABF is nearby and is watching,” Commander Yannopoulos said.

A total of 1890 blocks, each weighing about one kilogram, have now been unloaded from the vessel.

This 1.8 tonne seizure is now the largest on-shore cocaine seizure in Australia to date, and would have a potential street value of about $850.5m. 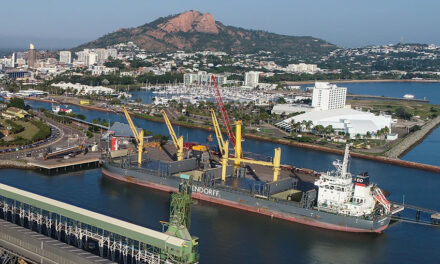