A dispute between the union and Hutchison brought protesters to the streets earlier in the year.
ADVERTISEMENT

Members of the Maritime Union have staged a demonstration at Port Botany, protesting the enterprise bargaining agreement offered them by Hutchison Port Holdings.

The protest was part of a 24-hour stoppage that affected not only Hutchison’s terminal at Port Botany but also its facility at the Port of Brisbane.

Union members gathered in the Hutchison car park at Port Botany around noon where they held a meeting before marching down the road to the Patrick terminal.

Patricks was understood to have been a target due to having agreed to stevedore some of the ships originally contracted to Hutchison.

A Patrick spokesman said about 100 people marched from Hutchison to the roundabout near the entry to the Patrick terminal about 1pm Thursday (24 January).

The Patrick spokesman said one lane into the Patrick terminal was blocked for about 90 minutes causing truck delays onto foreshore drive, with NSW Police confirming to Daily Cargo News that they detained and then moved on a number of people.

The demonstrators then were reported to have returned to the Hutchison terminal.

“Access to and from Patrick terminal is now clear and Patrick employees are at work,” the Patrick spokesman said. “There were no operational delays apart from the truck issues.”

Talks between Hutchison and the union occurred earlier in the week without resolving the dispute which has seen the union implement a series of work bans, as well as the 24-hour stoppage.

A Hutchison spokesperson confirmed the talks that occurred mid-week in Sydney and took an upbeat tone.

Earlier, transport sources in Brisbane noted “a small effect” with export cut off times being brought forward, with the major effect being on the ability to do empty stack runs.

“We note Hutchinson have extended free time to try and assist,” a source at the Sydney transport company said.

Meanwhile, ships originally booked with Hutchison have been sub-contracted to other terminals.

A Patrick spokesperson said shipping lines had contacted them to provide support during the industrial action this week.

The spokesperson said Patrick Port Botany worked the ANL Elaroo [Wednesday night] and would be stevedoring the OOCL Texas on Thursday. 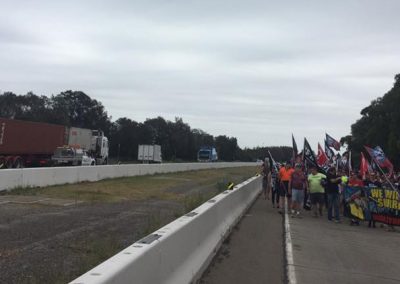 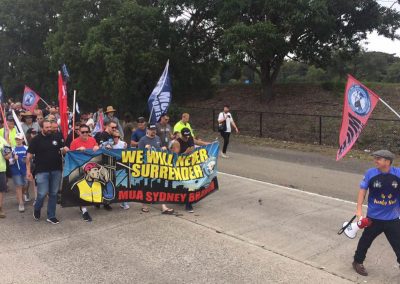