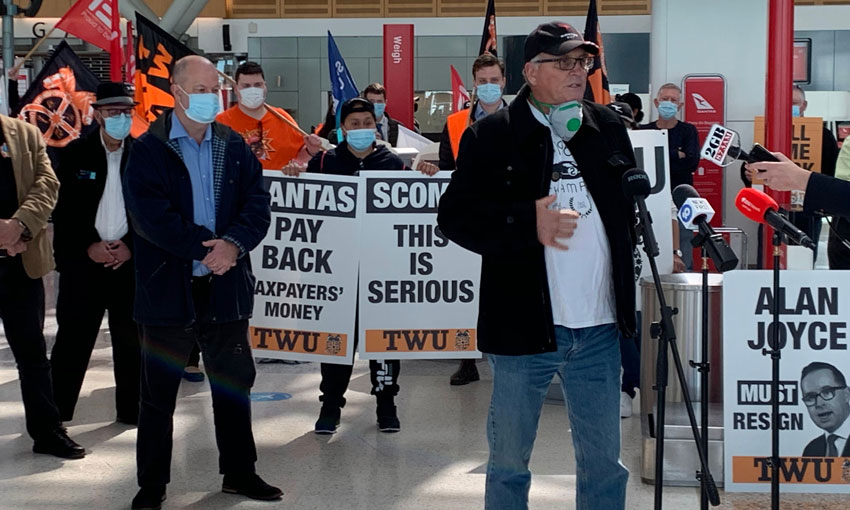 Qantas workers and union leaders give vent to their feelings at Sydney Airport. Credit: TWU
ADVERTISEMENT

MEMBERS of the Transport Workers Union have staged protests at the major airports in Sydney and Adelaide, angry at what they say is “axing and outsourcing of their jobs”.

The union also called for the federal government to take an equity stake in return for the more than half a billion dollars in public financial assistance already paid to Qantas.

Mr Kaine said the federal government must take an equity stake in Qantas.

“The Prime Minister said the point of Jobkeeper was to keep the connection between employers and workers. Yet Qantas has received hundreds of millions of dollars in wage subsidies and now wants to outsource jobs that it admits still exists.”

Mr Kaine said the money Qantas said it would save through outsourcing these jobs was around four times what they paid their CEO Alan Joyce last year.

“Mr Joyce must resign and Qantas must become the responsible employer that the Australian community wants it to be,” he said.

The Transport Workers’ Union has taken Qantas to court this week regarding aspects of the Jobkeeper Payment schemea and is also fighting a separate case against Qantas leave entitlements for sick workers.

More information about the dispute is available here.