WAYPOINT Port Services Singapore, an integrated shipping agency, has officially announced the opening of a brand new office with function to celebrate the occasion.

Other guests included Waypoint customers and partners, representatives from port operators PSA Singapore and Jurong Port, and officials from the Maritime and Port Authority of Singapore.

“The relocation of our Singapore office premises comes on the back of a better-than-expected operational performance in 2018, in which we handled over 400 port calls and catered to over 100 crew changes every week,” Mr Ramoo said.

Waypoint managing director Angelo Cachia said by operating from a new and larger office closer to stakeholders, Waypoint Singapore was now “better positioned to deliver first-class, end-to-end quality services at international standards; standards that our customers have come to expect from us”. 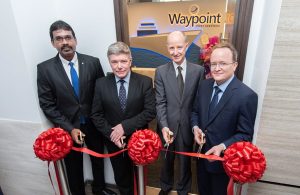