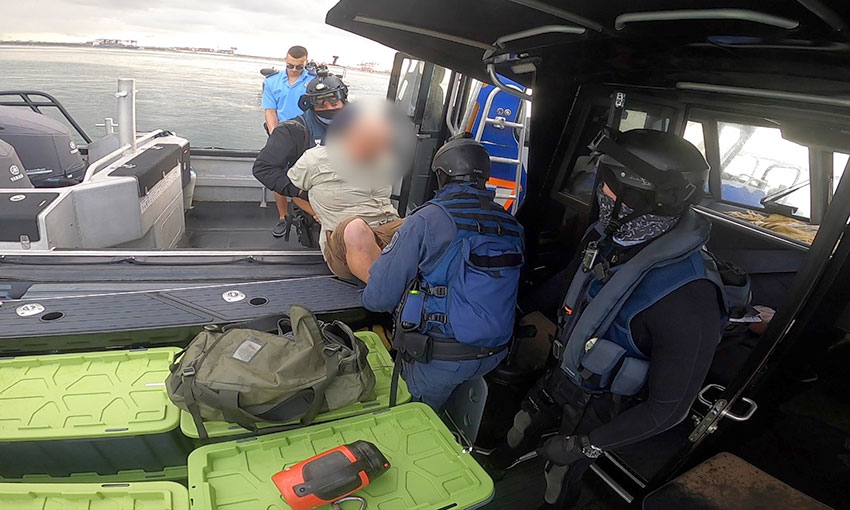 A man was arrested for allegedly helping to import 200 kilograms of cocaine; image courtesy of AFP
ADVERTISEMENT

POLICE on Thursday (11 March) seized about 200 kilograms of cocaine onboard a vessel after it rendezvoused with containership MSC Joanna as it was approaching Port Botany. A 27-year-old man from South Australia was arrested.

Australian Federal Police said they learned over the weekend that the vessel allegedly had a large quantity of cocaine bound for Australia. AFP then established Operation Poitiers with the NSW Police Force, the Australian Border Force, the NSW Crime Commission and the Australian Criminal Intelligence Commission on 6 March.

Aerial surveillance saw the South Australian man launch a small vessel from Taren Point in Botany Bay and meet MSC Joanna off the coast of Sydney before sunrise on Thursday (11 March).

Police allege 11 green-lidded crates containing 199 blocks of cocaine were offloaded from MSC Joanna and transported to the smaller vessel, which made its way back to shore and was intercepted by NSW Police officers.

Following the arrest, police followed MSC Joanna to Port Botany, where police searched the vessel with ABF officers and the Detector Dog Unit. DCN understands police enquiries are ongoing onboard the ship, and crew are still being interviewed.

An MSC spokesperson told DCN the company is co-operating with all relevant authorities in Sydney and declined to comment further while the investigation is ongoing.

The vessel is currently berthed at the Patrick terminal, and DCN understands the cranes are working the ship and normal cargo operations are continuing, as of Friday afternoon.

MSC Joanna (IMO 9304435) is a Panama-flagged containership with a capacity of 9200 TEU. It is on MSC and CMA CGM’s New North Europe Med Oceania service.

Police, with the assistance of ABF officers, also seized approximately $500,000 in cash from a storage unit in Caringbah, NSW allegedly linked to the arrested man. Investigations are continuing into the man’s alleged associates and the transnational criminal syndicate allegedly behind the drug importation.

ABF Enforcement Operations East Acting Commander Garry Low said criminals should be aware the ABF has eyes on our oceans, not just on our ports, airports and mail centres.

“This arrest and seizure shows how quickly crucial information can be actioned into a successful operation with alleged offenders arrested and drugs prevented from making it to Australian shores,” A/g Cmdr. Low said.

“My message to criminal syndicates is not only will we find your drug concealments when they reach our sea ports and airports, but we’re also watching your movements before you reach Australia.”

AFP Commander Kirsty Schofield said the threat from transnational organised crime groups is real and affects the security of Australia and Australians.

“Transnational organised crime groups prey on Australia’s lucrative drug market where Australians are among the highest per capita users of illicit drugs in the world, particularly in cocaine and methamphetamine,” Cmdr. Schofield said.

“As a nation, we need to look past that neatly packaged white powder image of cocaine and truly think about the harm this dangerous drug has on our families and communities.

“Our investigators are working day in and day out to ensure we intercept these harmful drugs before they cause devastation to the lives of vulnerable Australians.”

“NSW Police are proud to work with our law enforcement partners both here and abroad to shut down and suppress organised crime and place those responsible before the courts,” Det Ch Supt Bennett said.

“We are committed to protecting our citizens from the scourge of criminal networks and will use all the powers given to us to severely impact the negative affects their illicit activities have in our community. I would particularly like to commend the courage and precision of our Marine Area Command whose tactical expertise was crucial in yesterday’s operation.”

Members of the community with information relating to drug imports can contact Crime Stoppers on 1800 333 000 and can report it online through Crime Stoppers.